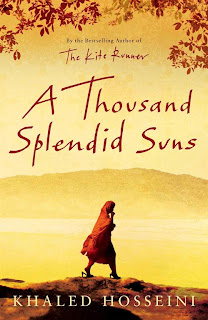 The Thousand Splendid suns- A beautiful book by Khaled Hosseini on the lives of Afghans. A story based on the lives of two Afghani women, Mariam and Laila who are from different backgrounds, gradually develops the relationship of mother and daughter in the terror of war.

Mariam an illegitimate child of her father (who is rich and has 3 wives), lives far from the city, grows up with an impression of being a burden on her mother. While her father visits her every Thursday and makes her feel important and desired. She wants to live with her father. On her 15th birthday, she shows her desire to see the latest movie Pinocchio with her step siblings. After being promised for what she had asked, when her father didn't show up on her birthday to take her for the movie, she reached there on her own and ends up spending the night at the porch. When deserted Mariam reaches back home, she finds her mother hanged to death, with a fear that her only daughter has abandoned her. Her life changed since then. Her step mothers considering her a burden on the reputation of the family makes her marry much older man Rasheed, a shoemaker in Kabul, who has lost his wife and a son sometime back. After her miscarriage, her husband becomes abusive and cruel towards her. Mariam continues to live with orthodox and abusive Rasheed.

One the other hand, in Mariam's neighbour a young girl takes birth; she lost her two elder-brothers in the war. She is an intelligent girl, who is admired by her father for her intellect and her interest in studies. As she grows up, she eventually falls in love with her childhood friend and neighbour, Tareek. His family decides to leave for Pakistan. After sometime as tension grows worst in Afghanistan, Laila's family too decides to leave the city, when a rocket hits her house. In this accident Laila loses her parents while she recovers in Mariam and Rasheed’s house. Rasheed lays his eyes on Laila, while on the other hand both the women strengthen their bond each day.

From here onwards their struggle for food and survival starts. As story progresses, it depicts how Mariam and laila became friends and from that how their relation grew stronger to a selfless and unbreakable bond, how they supported and stood by each other through their struggles for survival.

The Thousand splendid suns narrates the story of both Mariam and Laila, their struggle for life, their losses, their sorrows and endurances in those tough times and their sacrifices for each other. It depicts the purity and selflessness of their relation and the condition of women in Afghanistan. This story narrates the struggle of people, the laws dictated by Taliban on Afghans and the violent history of Afghanistan and its people.

I would like to recommend this Book to all the people since it makes up for an interesting historical reading. I like it, and I am sure you'll like it too. As it is my first book review, pardon my mistakes and story narration, whichever way I lacked. It’s a novel not to be missed. :)