"And the prince came to the princess and took her to the new beautiful world of dreams, beauty and perfection..."

The black Raven woke up fresh from the dream. Today she was expecting a Crow at her house to see her for the matrimonial alliance. The Raven was nervous and excited at the same time. thinking about the Crow to be her future prince made her feel the goosebumps. she got ready when her doorbell rang and there he was standing tall, the most handsome Crow she has ever seen, outside with the bunch of flowers. He asked for the Raven and she introduced herself. Crow felt cheated after looking at her. Oh! She is not fair, and flew away just like the other crows in the country. Raven was shattered, her dreams were broken, with heavy steps she followed to her bed.
Crow on the other hand was feeling bad, "why his parents gave him that address? I didn't like her. And she is no match for me." And thus, he decided to search for a white raven, may be somewhere to the west...
*After Thoughts: whose fault was it anyway?? 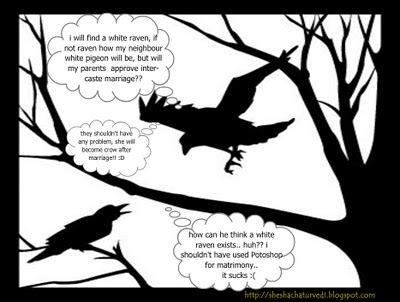