This Story revolves around Me, Rochana (my sister), Shweta(a family friend, we fondly call her piku), Jai (piku's brother) (we often used to meet on Sundays for which we used to wait eagerly), Shine and Karnika (prep friends).
We were a bunch of kids always ready for some mischief. But on the other hand we also used to treat ourselves as young Einsteins.
I dedicate this post to our childhood learning and to our friendship. Love you guys! Enjoy the Post. :D

1. Cloth Supply Machine
Lemme start with Shine, my friend from prep school. She was a child genius. Her dream was to make a machine which will be a box like and will have a handle to rotate. Utility- we can store a long cloth (like saree) from one side and when we will rotate it's handle we can get the supply of that cloth from the other side.. Today when i think about it, i feel it will be a good machine for the supply of handkerchiefs. Anyway, we used to talk about it for long hours on the terrace of Shine's house.

2. The Discovery of the Main source of Water
This Discovery was associated with another child genius i.e. me. There was a nice decent lawn in the front area of our house, where one could find leeches, earthworms, centipedes and other varieties of insects. My mum showed me some black leaves turning into leeches after pouring water over them. (they gain size, after getting water) So during my routine excursion around my house, i came across a black leaf. I brought water from inside my home and poured onto it, and y 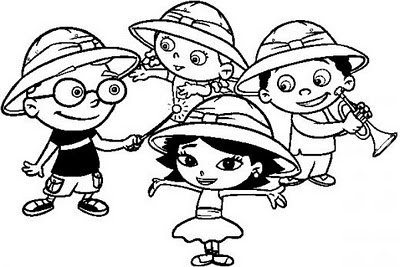 es it was not a leaf but a leech. now i thought of feeding it with sugar (just as ants) i poured some sugar on to it and to give it something salty i poured some salt over it. And the moment i poured on the salt, it started melting. Yeah! So this is the discovery. A few days later, Shine and chikki came over our house, i demonstrated the same thing after finding a leech. and Came on to the conclusion that there is a mountain of leeches somewhere, and somebody pours salt on them and we get water in our taps after that... :D

3. Who has the Longest small intestine?
Me and rochana used to create some art pieces and used to exhibit them in our room and make every guest visit the 'Picasso Gallery'. It had some models (like volcano, Iglu, Paper Aquarium), Paintings (fevicol paintings, glass paintings, colorful canvas comprising modern art :)) etc. ) and things like that. Our friend Piku, on a fine sunday evening told us that cockroach has got the longest small intestine and we decided to collect some facts to include some "Do you Know?" in our next exhibition. We did it. The next sunday she informed us that no! Its not the cockroach, its the frog. When we asked her that how can it be possible as we are bigger than them, she very calmly said because God has made them so. Their intestine is very thin and a frog can Jump very high only because its intestine helps him do that. Sounds logical. For once, I just want her to track the person who fooled the poor baby and hence us! We confidently included it in our fact sheet, giving all possible explanation to the elders. 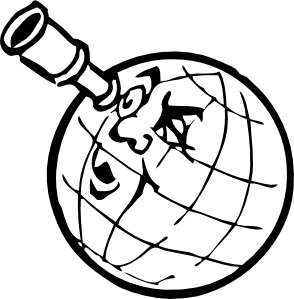 During one of the days with piku, she told us something very strange. She just got to know from some kind of a freak that scientists have discovered two more planets beyond Pluto, however the name of 10th planet just flew away from her mind but the 11th one is SMILEY. My sister was curious and excited and learned it by heart, though I relied on the world around me and being more interested in the things that are in my reach and less concerned with GK.
Hence, when the teacher in my sister's class asked about the newly discovered 10th planet in our solar system, she raised her hand and overflowing with enthusiasm, cried out "Miss, I dont know the name of 10th planet but 11th is the Smiley." :) It was her teacher's turn now to bring her back to earth. She shattered her heart by saying arrogantly "no, There is nothing like that, who told u this?" And smiley died for that time but its still there on our faces whenever we remember about it.

5. Tradition of vomiting among mesopotamians:
Again the source of enlightenment was piku :). She had a strong GK (We believed so). Another of her teachings that Rochana fondly shared with everyone everywhere was about mesopotamians. We were informed that they eat alot to the extent that they are filled to the throat and after that they vomit the whole food. Its just their tradition and there is nothing scientific about it...

6. The Remains of the Previous Births:
Again the light was shown to me from my dear darling P. She asked me purposefully "Do you know why newborns close their hands till a certain time?"
Me: Ummm No (puzzled)
P: This is b'coz they have memories from the last birth. And closing their fists means they don't want to let them go, and thats why they cry.
Me: Wow! How do you know? (impressed by her knowledge of different things, i certainly cherished a friend who can not only play with me but also tell me the hidden secrets and mysteries of the world.)
P: yaa... Umm. Somebody. (she said suddenly)
Me: That is why every newborn baby cries.
P: Yes. And when i grow up and get a baby, i will keep his fists closed till the time he learns to speak.
My mom overheard the conversation. She joined our world.
Me: Ma, do you know?
Mum: I didnt know (she moved her face to P). And if he remembers his previous birth he will go to the place he belongs to!
P: Oh! Then i will not do this, (changing the topic) But do you know if we don't run we will gain so much fat and will never get to enter from our doors, we have a very fat girl in our school. and her parents are very very very fat, so fat that they had difficulty entering the class. Lets play red cross now...
Email ThisBlogThis!Share to TwitterShare to FacebookShare to Pinterest
Labels: children, Life Previews