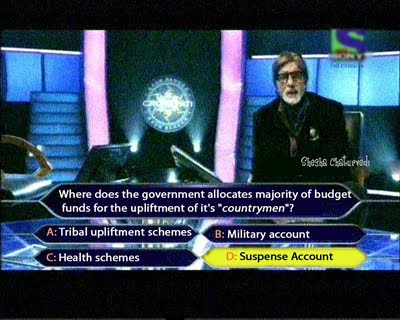 1. If you are tired of swinging back and forth from government offices, taking time out from your 9-5 job, for getting your basic work done.
2. If you crib that nothing can be done and system will never change! ( a system will change someday, unless you are a pessimist)
3. The person initiating the cause can be trusted more than any political party in elections for which u vote every 5 years! His past records are clean. No corruption, an army man who fought for India, for his country and is still fighting for it!
4. If you are not scared of fighting. We never give exams to fail, fail or pass comes later! (People thinking :" How can we say adding another layer to the already existing system could be a solution? People in Jana Lokpal could be corrupt." We can’t stop working for our daily bread with the fear we won’t get it)
5. If you can’t stand in elections, can’t give speeches and can’t make a difference, just be with the masses and play the gamble!
6. If you think cause is right but method is wrong : Stand up for the cause!
The ones who think fasting onto death is an offense, there are more severe offenses than that. There is a vast difference between making you suffer for the sake of others’ lives and creating situations for others to die. And hence there is still a big difference between Anna and government respectively. One question raised by a friend on facebook (Megha) “Eat to death or fast to death, what would you prefer?
7. If you are not amongst those who who have a smooth life and have money, corruption/no corruption doesn’t make any difference. Why to bother! I don’t care attitude!
8. If you are tired of watching scam stories on news channels, uncovering one after other biggest corruption scams today, seeing the tax you have paid for benefit of your nation and society being stashed away in foreign banks.
9. If you compare India with US and UK and constantly complain about life here.
10. If you care about the common man more than the party you support!

P.S. Dont think if you are not fasting or not physically present there you fail to support, a mere status update, blog update shows the support! A recent example of Ram Janmabhoomi, Ayodhya case when so many people registered their views on facebook, blog, twitter were acknowledged in news and newspaper. Time has changed and so the electronic media is also used for sampling, interviewing and researches! Think well!
Email ThisBlogThis!Share to TwitterShare to FacebookShare to Pinterest
Labels: India, India against corruption, indian, Media, men and women, people, politics, reality bites, sarcasm, Take Ten