As a child the dreams were easy to see. Some were as small as dreaming of getting a doll or a toy car, and some were as big as finding a fairy in a white dress with those two large wings and flying high with her. Both dreams had a big difference, one was close to reality and other had no connection with it. One could possibly be achieved, other was lived forever in a hope to be achieved. Where the former got fulfilled, latter was beautifully lived without regretting or bothering if it will be realized someday. Both were different but both had contentment, a tranquility and a joy of living the different worlds and were lived without a fail, a repent or a sorrow.

One day we started growing up. And the world started shrinking in our minds restricting our fictional wisdom with its facts and figures, the dreams now got closer to reality. When as a child only dreaming mattered, now making that dream come true was the motto.. When dreams, were not transformed in reality now, we were torned, the trust vanished, the hopes broke!

As a child it was a dream to pluck the stars from sky, or holding that moon with a thread to stop it from falling down during the day, finding a white pony with wings if not fairy, or finding a chocolate bearing tree, is now that elusive dream that has no meaning, irrespective of how beautiful one had thought of even being a child...
A friend rightly said a few days back, "when u grow up its hard to bridge up the gap between reality and dreams."

Lying idle under the sky
With you besides
When as a child plucking
Those stars was all i dreamt of
Now holding your hand
Is all i want to
I used to pray for a fairy before
To take me on the worldly ride
Now you give me
my invisible wings for a lifetime flight....
6 comments:
Email ThisBlogThis!Share to TwitterShare to FacebookShare to Pinterest
Labels: Contemplation, Dreams, Emotions, Introspection, people, Random thoughts

To Smokers with Love... 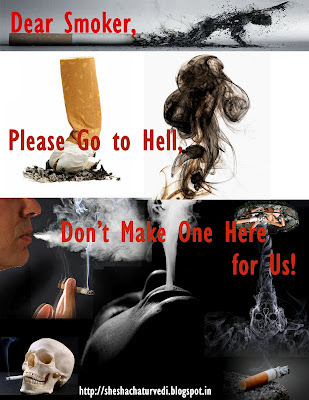