Mother he has lost his Tongue

A month back, while talking to a guy for some time in English, I spoke a few words of Hindi, and all of a sudden I heard him saying, “Don't mind can we interact in English and not in Hindi. You seem comfortable in it." I counter questioned him, “Ya, but why are you restricting me? Don't you know the Language?" He said,”Ofcourse I do, but don’t mind, we have this habit of communicating in English at work, and I don't like Hindi much.” I was awfully shocked to see how a person, who was born and brought up in the Hindi speaking environment, was now discarding the language, because he has been communicating in some other language at work, and is no more comfortable with his background/nation. In such distressful times I respect my identity a little too much , I simply told him, “I Love Hindi, and would now prefer to talk in it.” With his prejudice and pretence, he lost his impression!
Another incidence is about a teacher teaching in one of the popular schools of Delhi ( don't want to name it here). Being a Hindi language teacher, she faced the humiliation and bias. Other fellow colleagues looked down upon her, and preferred not to talk to her for she lacked in English communication skills. While sharing her humiliation with a popular Hindi journalist, she got tears in her eyes. (....and I used to think Language is for communication.)


In the Era of globalization and 'weblization', there is a need for a common language. In a country like India where many languages are spoken, English has become a common meduim which caters to the communication needs of Inter/national  friends, clients, businesses etc. But does one International language unite us with the basics and locals? Is it the matter of pride or shame, that people have started looking down to those, using Hindi and not English?I was shocked to see the prejudice in the outgrown minds of today for English over our mother/national tongue!

How proudly somebody was telling me a few days back, that in Japan, people prefer to speak Japanese, in China they interact with each other in Chinese, and Germans love their language as well, if you need to live there, you ought to know their language, people want to learn Spanish. What happened to India?
Every place, region, country has a language, culture of its own which binds them with the locals and commons.Language is our fundamental identity; it connects us with our customs and rituals. We are, little by little, discarding our mother tongue, deliberately trying to impersonate somebody we are not. For that fake admiration in the midst of futility, we are making fools of ourselves.

P.S.  Don't be shameful of your existence. Try to talk to a person, in the language he is speaking. There is no trophy in the end for decorating your tongue with English vocabulary and fake accents and look down to people who are not well equipped with the same!

P.P.S. It is always nice to know multiple languages, it develops your brain 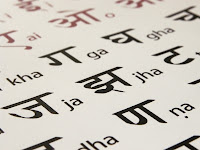 Questions in the End: How Important is your mother tongue for you? Would you be proud if somebody calls you European/American instead of Indian? Or during one of your patriotic fits, will you be hearing patroitic songs dubbed in English with a "yo- touch" in them? How will you pronounce chat-papdi, Dahi-Bhalle, Chole bature, Golgappas, Pao bhaji and other Indian snacks for which you die to scoff on at the local shops?
Email ThisBlogThis!Share to TwitterShare to FacebookShare to Pinterest
Labels: accents, hindi, India, indian, people, Social issues