This is becoming a trend. A trend that every retailer cultivates and advocates religiously. If not every retailer most of them do. Hence, its becoming popular with passing years.
My story started with an emerging requirement for some commodities one day. I went to the stationary shop first and asked for some ball-point pens that I needed, the total bill came out to be Rs. 38, after giving 50 rs.  I got  back Rs. 10 note with two toffees (1 re. each). I then went to a grocery store and asked for sooji(rava), besan and other stuff and handed the shopkeeper 200 rupees against the bill of Rs. 145/-. I  got back Rs. 50 + five sweets, I asked for change to which he replied he had no change.

Coming back home, I noticed there were too many such sweets in a small basket on the table near our dining table -contributed by all the family members! So we unknowingly bought Rs. 50 sweets in a few days span, which we were not interested in consuming at all. The drift was becoming popular.

So we were discussing this new exchange system at home thinking if people can keep sweets why can't they keep change? If this is the new one rupee coin, or a new exchange currency we should also make use of it. 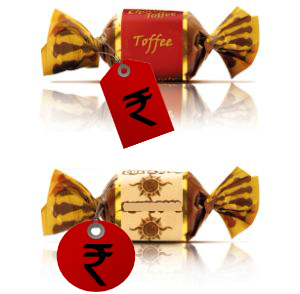 Post few weeks, me and my sister were getting out from a metro station. We bought water from the stall, he asked for 12 rs. I handed him Rs. 20. He gave us Rs. 5 coin + 3 sweets. (As usual).
My sister told the guy that we don't need sweets. He insisted he doesn't have any change. I asked for my 20 rs. back, handed him a Rs. 10 note and 2 sweets.

Smiling sheepishly he uttered-" hehehe Madam esa thodi hota hai." (madam, this doesn't happen) handling us the sweets back,
My Sister- "Bhaiya kyu? Jab aap humein 2 rs. ke badle sweets de rahe ho, toh wapis lena bhi seekho. hum hi mile hain bevkoof banane ko?" (Why? When you can use them as a currency why not us? Don't make fool of us)

He was embarrassed. after a few minutes of debating sessions, his logic failed, he fumbled for some change inside, gave it to us, and yes we were victorious and over with this sweet collection hobby...

P.s. You can't sell me the things I don't want to buy.

Author's Note: I noticed  yet another problem with some folks i.e. not returning the change at all. While watching a play we bought some snacks during the interval, the quality wasn't good hence we returned it, the shopkeeper handed us 50 bucks back retaining ten rupees on purpose. We had to ask for the rest of the change which he handed back reluctantly. Assuming a customer won't ask for Rs. 2 or Rs 5 change(out of embarrassment), which multimillionaire Delhi folks might be doing considering it a status symbol entertaining and facilitating greedy habits in the markets, shopkeepers are facing a change in the values . Better to hand them to a beggar outside on roads, at least they are openly asking for a Bheekh!
Email ThisBlogThis!Share to TwitterShare to FacebookShare to Pinterest
Labels: Life Previews, people, Random thoughts, Social issues