While playing a game introduced by a fellow blogger on indivine, I thought the time is ripe for sharing ‘Soaking’ experiences.  I decided to give an entry at least for the game and see how well I play it.  Game was to change one letter at a time and reach from Soak to Soak. eg. SOAK>SOCK>SOAK


My First attempt: SOAK>SOAP>SOAR>SOUR>POUR>HOUR>Whats next?
For some reason this sequence of words seemed appealing!

I hate to wash clothes. I can play with JHAG(foams)-  creating large bubbles but washing clothes especially rubbing them is a pain. I usually try to procrastinate during such distressful times.  Though this pain does not feature often in the era of advanced fully automatic machines. However, it hurts when somebody accidentally spills the gravy  or soils clothes while walking on wet muddy paths during monsoons. Sometimes we don't place the towels over the pillows before resting our oily heads out of forgetfulness or sheer laziness. When the time comes to fight those stiff, stubborn stains, especially from the new or favorite dresses, I feel like cursing the time when such unfortunate casualties happened. I wished washing clothes was as easy and as enjoyable like taking bath.

To fight these stains one has to Soak clothes in Soap for hours - waiting for the lipophillic interior of the micelle to surround the layer of grease, and then rubbing them with the brush to make the stains less stubborn. The actual story is not that simple as it looks. A person like me busy in different things forgets her responsibility towards clothes after that. So the poor cloth, who has been soaking in for long(sometimes more than 4-5 hours) wishes to die, to commit suicide, may be cursing me for not taking it out and shortening it’s life. Further stabbing the cloth with brush weakening its threads and killing it brutally makes my heart ache. My neck tells me that it is tired of hanging down in the same position for so long during the process. In addition, the spine craves for a rest. What else, my hands turn hard and rough begging a manicure. My dad often laughs looking at me while I massage the cream on my palms after the hard labor. 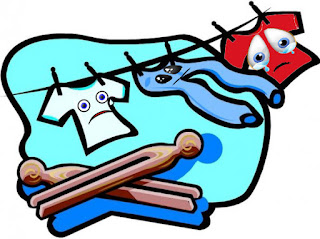 Since I heard about Surf Excel Matic’s new invention with the Tag ‘Soak no More’, I really wonder if God has answered my prayers during those those hardships! No more murdering of clothes nor any more neck pain or backache. I realize how life can turn easy with new inventions.
Few days back I really smiled when my niece accidently dropped her chocolate ice cream over my shirt, I cared no more!
I decided to take reverse steps with some addtions:
> HOUR No More > POUR NO More>SOUR No More> SOAP No More>SOAK NO MORE :)