Say No to Domestic Violence!

Recently I have posted a poem Apamanit (Hindi) meaning Insulted which was about the daily struggles of a marginalized woman, a victim of domestic violence and rape. Ever since my childhood, I have been hearing majorly from our housemaids and sweepers and wash-women about domestic violence at home. These women are earning and independent and yet suffering and at the mercy of their men. I can recall one day, when one of our house maids came home with bruises on her face and body, my mother asked her what had happened to which she replied: “ my husband came home drunk, wasted and hit me with a wooden stick badly. But he is not a bad person, he did it under the influence of alcohol and this morning he saw these bruises and said sorry and applied medicine over them.” After talking to her for some more time we discovered that this was a routine she was accustomed to. I was amazed that she doesn’t mind it at all.
The reality is as against common perception, this malice is not restricted to poorer or illitrate sections of society. The case of a cousin of one of my mother's friend comes to my mind at this point. This woman was living with her husband and two children. Her husband, an engineer by profession, used to come late at night bringing some or other woman with him. He used to ask her to serve drinks and insulted and abused her verbally and sometimes used to hit her as well. When her children grew up they all moved out of that house and found shelter at the house of my mother's friend. I wonder why she never filed a case against that man! This was an incidence from the so called middle class of the society.

Another lady I know has a suspicious husband and suffers from daily verbal abuse from him. He keeps constant checks on where she goes, whom she talks to and suspects her fidelity each time she interacts with a male, whether he be young man from a grocery store or her co-worker or some random guy asking her directions. She also belongs to well-educated upper-middle class, in fact she's a professor.

This violence is not confined to only husbands but also the brothers and fathers of females. I know one more family with super rich background where the girl was in love with a guy belonging to a different caste. Her brothers beat her up and locked her inside a room for a long period of time.

Here I feel the need to mention one more case where I had a classmate in school (in 8th standard), who used to get severe fits whenever she used to secure poor marks in her subjects. Later I got to know that on getting low marks her father used to beat her severely at home as a punishment. I was into the tears knowing that.


Why these women suffer so much?
Some women suffer because of orthodox mindset. They are compelled to think they are dependent and at mercy of male section of the society despite being independent and major contributor to the family income- upbringing of a chauvinistic society. Others are homemakers and dependent on their spouse. Separation is unthinkable when there are non-supportive parents/siblings, a divorced lady will be a stigma on the whole family and every one related to her will be judged by the society. There are some who stay in bad marriage for the sake of their vulnerable children.

Recently Indiblogger has come up with a new campaign Indichange(where they will harness the collective power of blogging to fight social evil) and supporting an award winning global campaign Ring the Bell i.e. Bell Bajao that calls on men and boys around the world to take a stand and make a promise to act to end violence against women. This campaign will start from 8th March 2013 to 8th March 2014. They are going to get a million men to make a million promises to ACT to end violence against women. It is very important to bring the change in every section and class of the society.

A question arose in my mind: People who will gather are already good, how will this change others who are not? 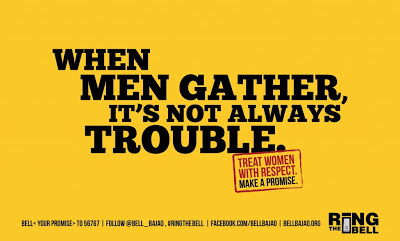 The answer was within me- By constantly talking about such issues, creating awareness about it and then writing about it further creates a vogue and people who have not yet become a part of this thought process. When people read and re-read, hear and re-hear about these issues they are compelled to introspect. Any mass movement is worth the cause and can bring the change. It may take time but it will not go without any impact. Also from the cases I have mentioned above we can conclude we need the support of men from every class of the society. So I request all the men around the world: 'BELL BAJAO', RING THE BELL! What better gift on women’s day than to give women in your life- a safe, secure, respectful and loving society.

We are no scavenger's feast,
And we want men, not beasts...
Email ThisBlogThis!Share to TwitterShare to FacebookShare to Pinterest
Labels: India, men and women, people, Social issues, Women issues