It was 2nd of October, Mahatma Gandhi's Birthday and a national holiday. We planned to pay a visit to the city of Fatehpur Sikri near Agra, along with one of our cousin who was in Agra at that time.
Fatehpur Sikri (city of victory, Fateh means Victory) served as a capital of Mughal empire during Emperor Akbar's reign for 13 years. The construction started in 1571 and was completed in 1573 and is made of red stone. It is considered to be one of the best heritage of Mughal architecture.

I would recommend the place to those who enjoy beautiful architectures or have historical interests. Especially for people living around Agra- it can be an interesting weekend getaway.
Some of the monuments amongst many are Akbar's Palace, Palace of Jodha Bai (Hindu wife of the Mughal emperor-Akbar), Palace of Birbal, Deewan-e-Aam (hall of Public audience), Deewan-e-Khas (Hall of private Audience).  One of the best features that I found there was a mix of different cultures in the architecture. It has borrowings from  Hindu, Persian and Indo-Muslim traditions. One could see Rajasthani Patterns on the walls, a building with a triangular end and a cross atop placed in harmony with other Mughal tastes.

We left for the place early morning at around 6.30. It took us four hours to reach the place via expressway from Delhi. 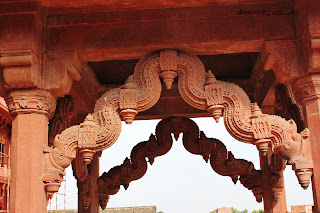