After spending two good days in Kausani, we started from there to explore Almora. On our way one of our travel mates shouted" wild fox" I was in dilemma whether to take out my camera lens or get a glimpse of that fox. I chose the latter. A red colored little animal with a long broom like tail was crossing the road into the forest. Our driver stopped the car giving us the opportunity to take in the scenic view of the landscape and then guess what we discovered? Marijuana leaves! Since our driver was a knowledgeable man, he shared some insights about that very plant with us-
The Cannabis plant's leaves share resemblance with the leaves of marigold plant. It is believed to be a native plant of India, where it possibly originated in a region just north of the Himalayan mountains. Interestingly all the parts of this plant are used as different type of drugs:  the female sativa cannabis plant.  Marijuana (weed, pot, ganja, etc.) is made from the dried flowering tops, leaves, stems and sometimes seeds of the plant, often mixed together. Hash is the pure resin separated and collected from the flowering tops of cannabis plants.  Hash, depending on the purity, varies from golden brown to black in color, and can be smoked, eaten or vaporized. The locals also put this as a herb as a garnish in their  food, to help fight the Himalayan cold.

Near Almora, in Jageshwar district, we visited another group of temples which were constructed in similar fashion  like Baijnath Temples in Bageshwar District.


The two photographs above are of the same place. While in the first one the valley was covered with a river like trail of clouds, an hour later it was all clean and we could see the houses beneath. It was magical.

In Nainital, we saw Naini Lake, the mosque, Gurudwara and temple (all near to each other) and enjoyed a brief walk at mall road. 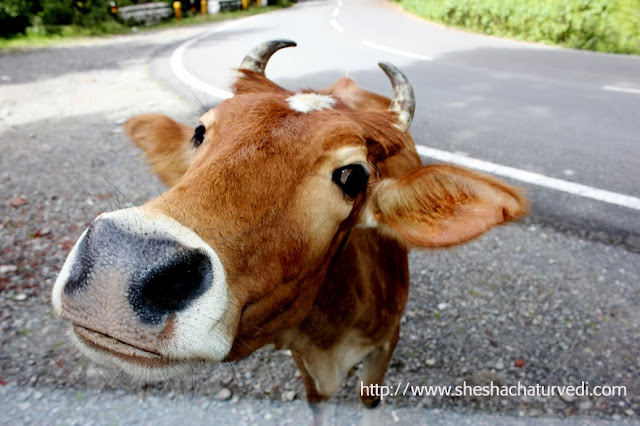 Curious Cow
Cities like Nanital, Almora, Kausani, Mussoorie rather whole state of Uttarakhand is a nice place to explore. We missed Binsar, a wild life sanctuary near Almora due to lack of time, you could add that in your checklist.

I hope you have enjoyed the photo-journey of the place.
Keep smiling!