'What is up there in azure mother? '
She looked out the window and then further.
And said- 'there are birds flying above ,
Probably an eagle chasing a dove.'

Child nodded and asked again,
His mother couldn’t read his brain.
She said- 'there are clouds above
It may rain today my love.'

The child now asked once again,
Alluring thoughts going through his brain.
'Mom, what resides beyond the clouds,
Something that is not visible and loud?'

Mother replied:
'Son, the wild blue yonder is so vast ,
A celestial shadow it does cast .
Some stars shimmer across the poles,
Some turned into black holes.

And there are some
Who themselves burn
But give us warmth
in return.

Then there is the sycophant
It's sun's name it does chant
Who then grants him a boon-
And behold luminous is the moon.

Some planets live far aloof
not visible from any roof
Calmly breathing in tranquility
far away from our tales of glory.'

I know that's where he lives
when I am asleep, he privily peeps
from the one that glows most at night
and smiles silently at my sight.

Last year I followed A to Z Challenge on Shilpa's Blog and found it interesting. There was a new post daily, dedicated to a new alphabet in that order. This way of writing and regular posting seemed quite attractive, and following those posts as a reader was interesting for me as well. 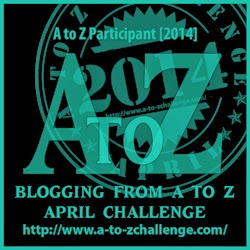 Being a blogger myself this year when she shared the news of A to Z April Challenge, 2014, I thought of signing up for it.

Here is the Challenge:
In April I will be posting one post each day (except on Sundays) on different topics in an alphabetical order. For instance on 1st April, the topic will start with the alphabet A, on 2nd April with B and so on till 30th April with Z.  Hence 26 different posts on 26 days of April (Sundays are off

) It will be interesting to see what all words I and others in the race will pick up. I need the support of my readers and fellow bloggers. Wish me Luck as I will be posting as much in April as I post in the whole year.

Since this is my first time so I will not be following any theme like experts. I will select some random words and will post my take on them. So be here with me for this April and support me to complete this challenge!

Those bloggers who have not yet signed up but want to, please do it now! All the best.

Have you ever wonder why boys don't bathe when young? They prefer stinking socks over a washed pair, or prefer to wash hair once in a blue moon with shampoo. Either they are lazy, studious, procrastinator or bath is just not their priority. I had known such boys when I was young. Against a furious mother, my brother used to take cover under the excuse that if he indeed bathed daily, he would get decomposed like soaps or washed out like old clothes. Some of these stink machines changed with time or under the influence of their wives or girlfriends. That is why God has created women, to save the mankind from horrors of daily life.

Like everyone else I too had my share of smelly encounters, but there is one that can never be forgotten. I had my 10th standard CBSE boards and I used to go to my cousin's place to study. With highest score in his class and a strong determination to work even harder, one of these cousins couldn't afford wasting his precious time bathing during his board exams of class 12. He told me he hadn't taken a bath for the whole week and hadn't washed his hair for over two. I was trying hard to hide my revulsion but it was so strong that it found it's way to my face, and my cousin, unfettered, without any trace of embarrassment just laughed.  I was somebody who would not have her breakfast without taking a bath. I further imagined if this continues for another week, this heat and his sweat would consume the human race and some new species would then evolve and flourish. I pictured his body transforming into jungle, with termites and leeches, and big sand-mountains glued over him. Being a fan of fairy tales, I was prone to such type of imaginations.

I decided to fight this evil. Adopting a most serious countenance and with my wisest expressions, I, in a calm yet convincing tone, asked him to take bath. I gave references to him that my mother gave me about the health problems faced by people who don't maintain good hygiene on routine basis. When he seemed unperturbed, I, a little exasperated, started exaggerating describing leeches and mice crawling over his body.

He was smiling. But I had come too far to go back, I was persistent. Since he was elder, and smarter too, he decided to calm me instead of shunning me. He said, he will take bath on the same day on one condition. I was ready to agree on every condition at that time.
"Close your eyes", he said

I closed my eyes.
"Now think about the place you want to be at, imagine the surroundings."
I did exactly I was told.
"Now, take a long and deep breath", he continued.
I took a very deep breath... and I ended up getting choked. A shriek escaped by mouth.
He was laughing. Have you guessed what happened?
When he asked me to take a deep breath he put his unwashed head of two weeks under my nose. Summers made the stench even worse. The horrendous smell went down from my nose deep into my throat. I would have haunted him for rest of his life had I died during that smelly encounter.

He did bathe later. And I got the lesson of my life: Don't stress or mess with your brothers. They are the real masters of the game.

P.S. I posted an advice on How to woo a girl, on something I heard sometime back! With evolution our attraction parameters have changed.

TeamIndi and Racold you made me re-live the old pains. Because of you I decided to share the heart-wrenching stench-story of my life. You owe me something!

Other Side of the Bridge

They both knew that hiding the truth, dodging questions, answering in lies will make it more difficult for them to cross the bridge of their egos. But they chose to put curtains of practicality upon their desires. They yearned for the presence of each other, but feared the disclosure of their vulnerability. Their intense emotions were making it difficult for them to breathe during the exchange of greetings on virtual world. No one knew any way to unlock the doors that they had closed behind. He decided that he will cross that bridge only if there seemed a substantial hope.

Drabble is a piece of fiction strictly in hundred words.
Last Drabble I wrote: Sarah

I turned 30 yesterday. I was reluctant to step into a new decade of my life initially- but  I didn't have any choice. Had I had any, I would have procrastinated for some more time (frankly). But why? I thought a bit further. It is may be because in 30s our hormones do not inspire us to shout out loud, or to jump in excitement, or to do or talk about something silly. Rather they ask us to keep calm and not to react.  With these mixed feelings, we end up reacting on the same terribly. We start hating 30s. We have to tell ourselves- its just a minor change in number, nothing much!

People say turning 30 is no fun. But it can be if you have loving, funny, concerned and all kind of people around you. I am sharing 9 different reactions that came free along with wishes yesterday. Plus last one from mine to everyone who has or who will turn 30 sooner or later!
Do share any different wishes or reactions you came across on your age!

1. The funny and out of the box Reaction: 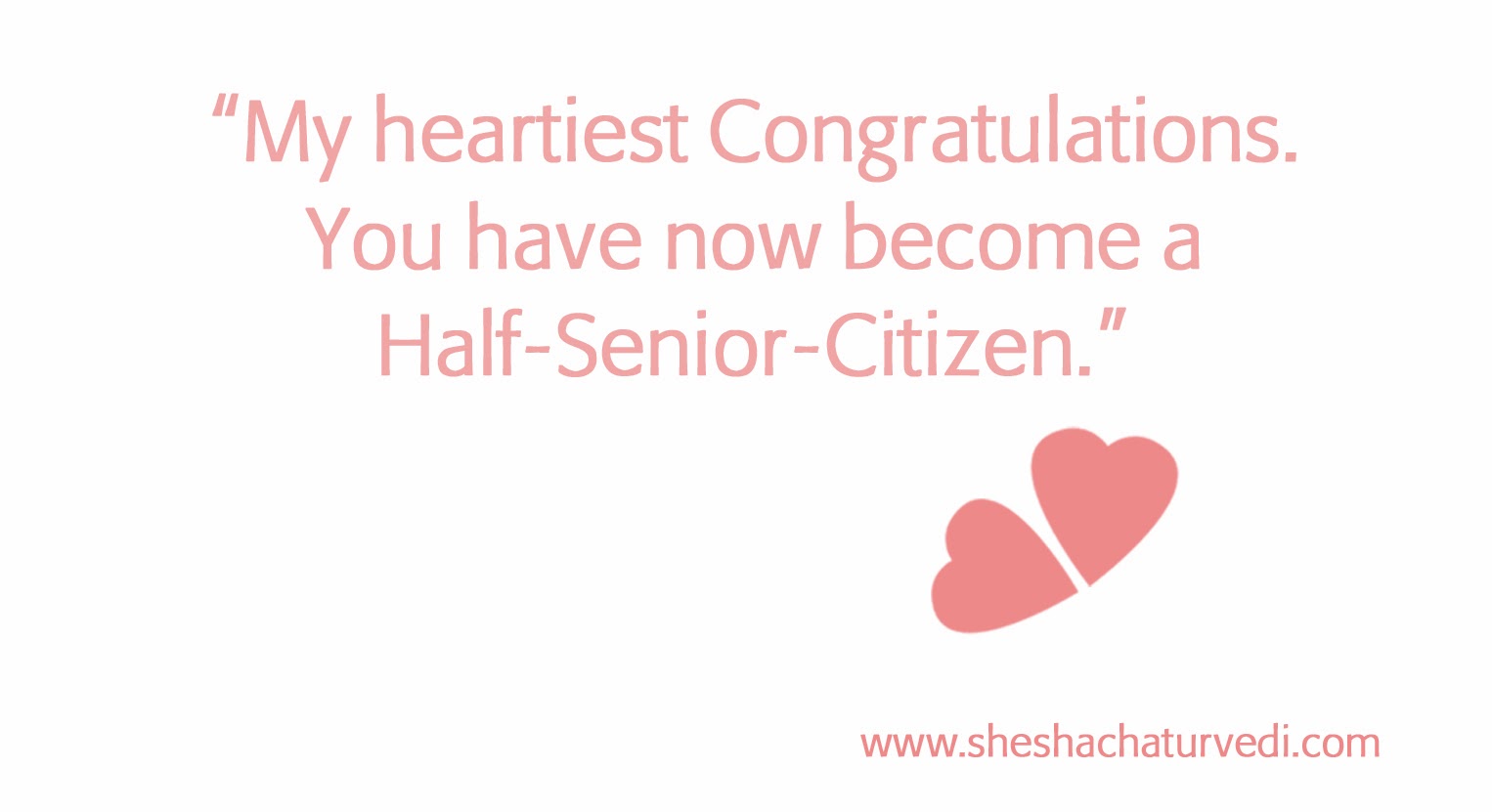 That teaser came from my  elder cousin- I was taken aback for a second but couldn't stop laughing in disbelief of what he said. He has humour :) :D I once asked a friend about why do they talk about anti-aging creams at 30. And this was his plans for my 30th birthday's surprise gift. He even advertised the cream! I will shoot you, was all I said with a loud laugh!

3. I don't want to make you feel bad but...Reaction 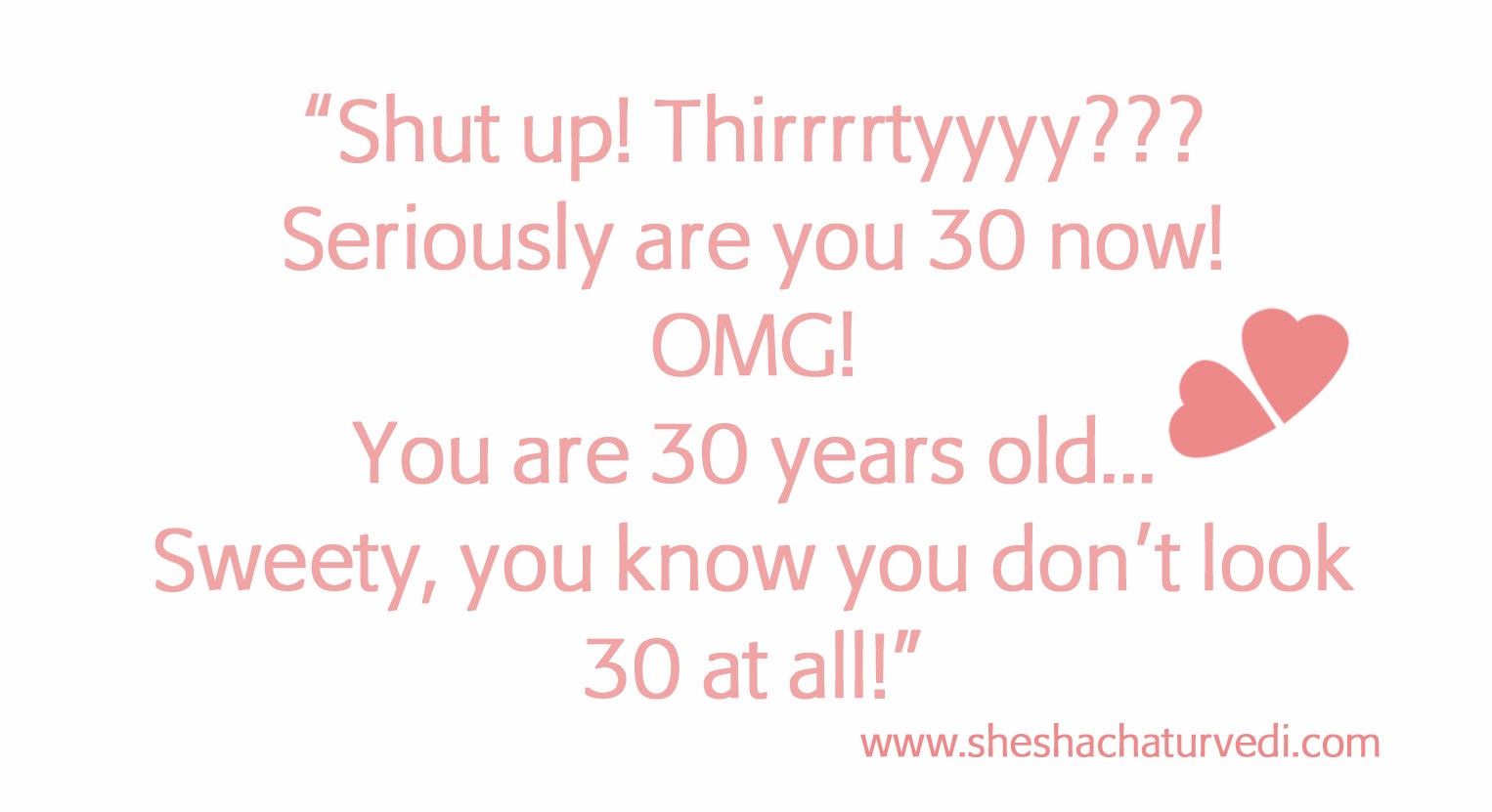 Thank you for your disbelief, I for a second really thought 30 is older than 60! 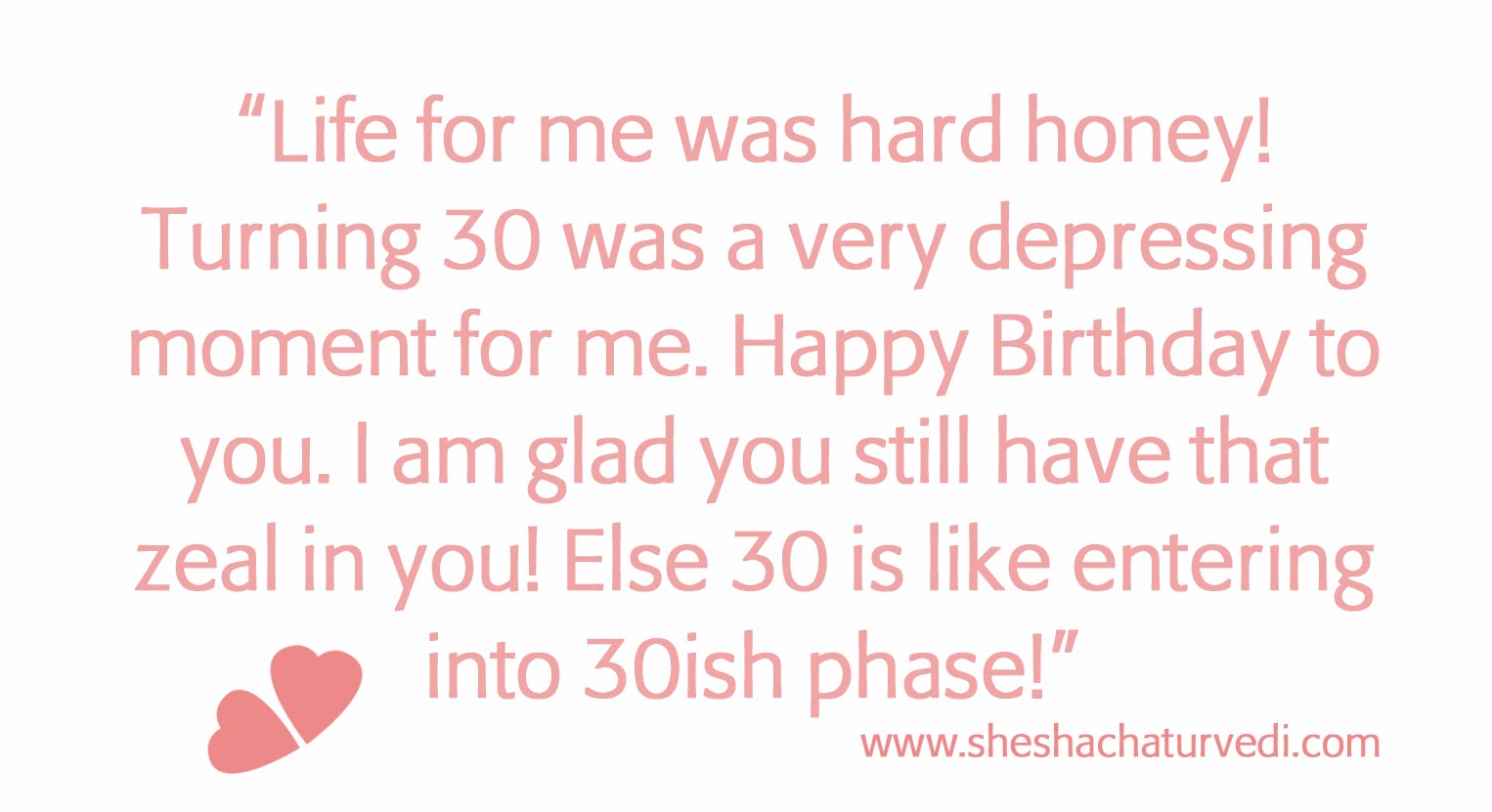 I really don't feel bad honey... Had our parents not grown you wouldn't have been here mourning! 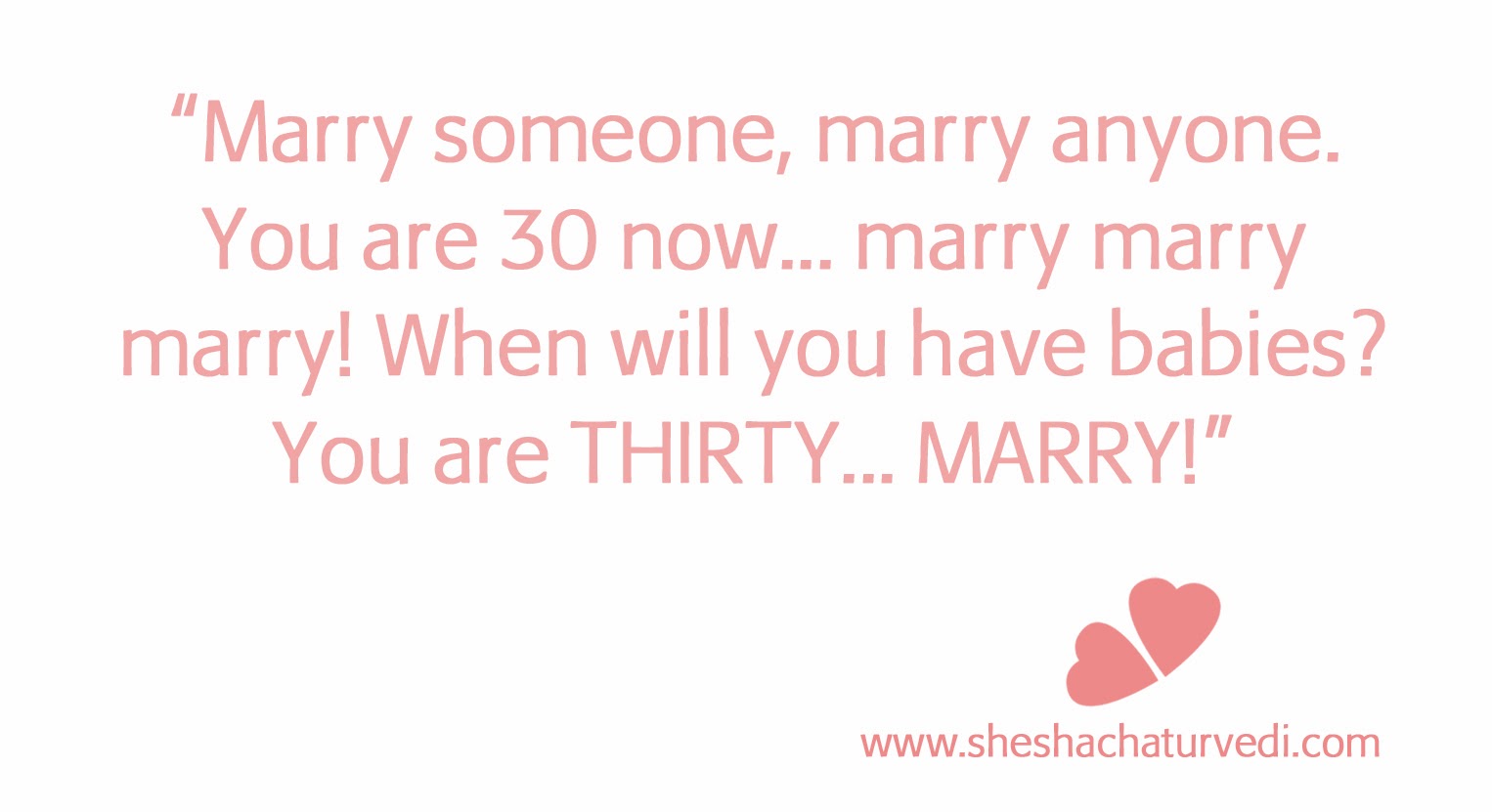 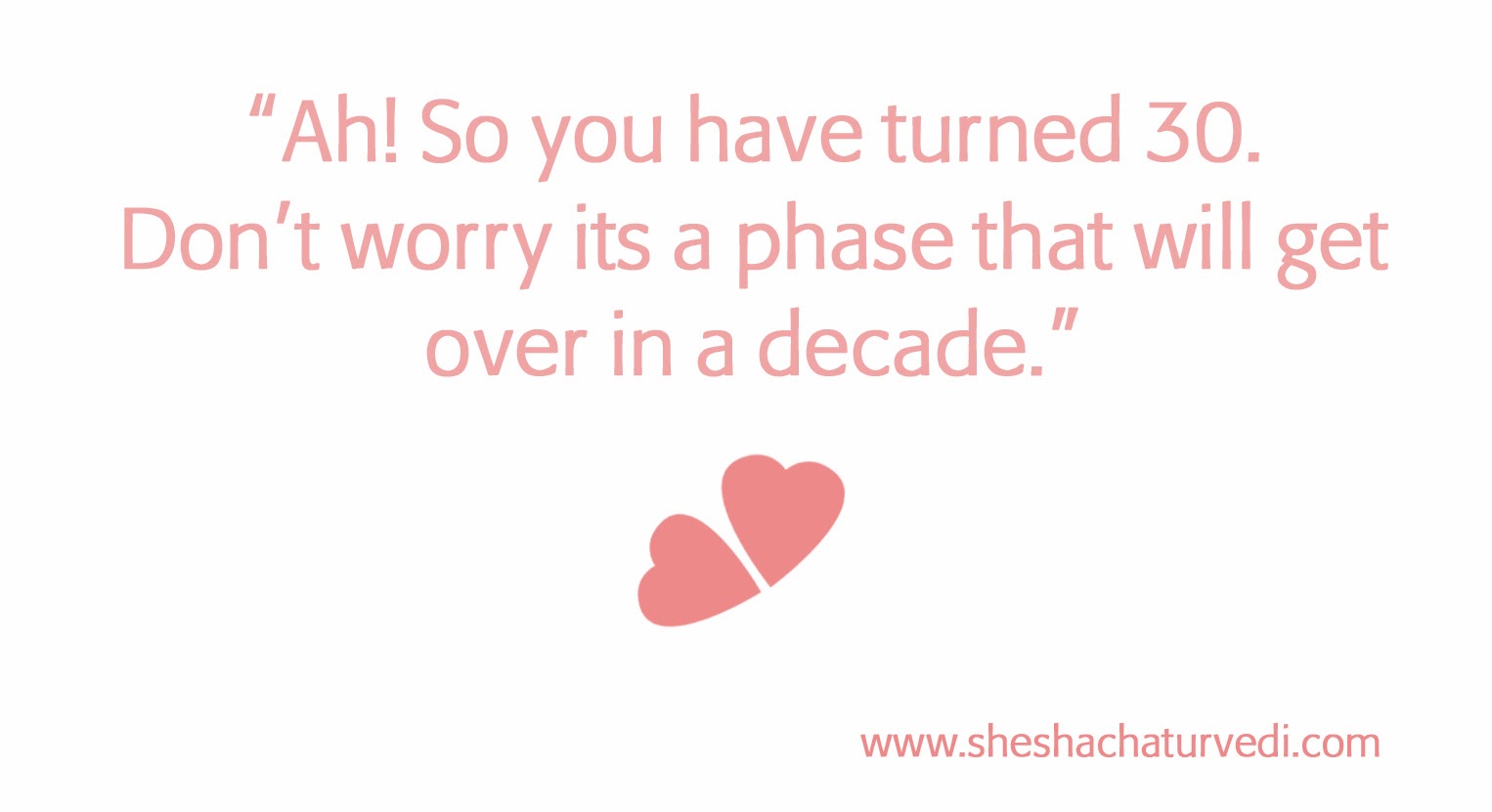 Doesn't this line create a panic... In a decade I will be blogging about 40s. 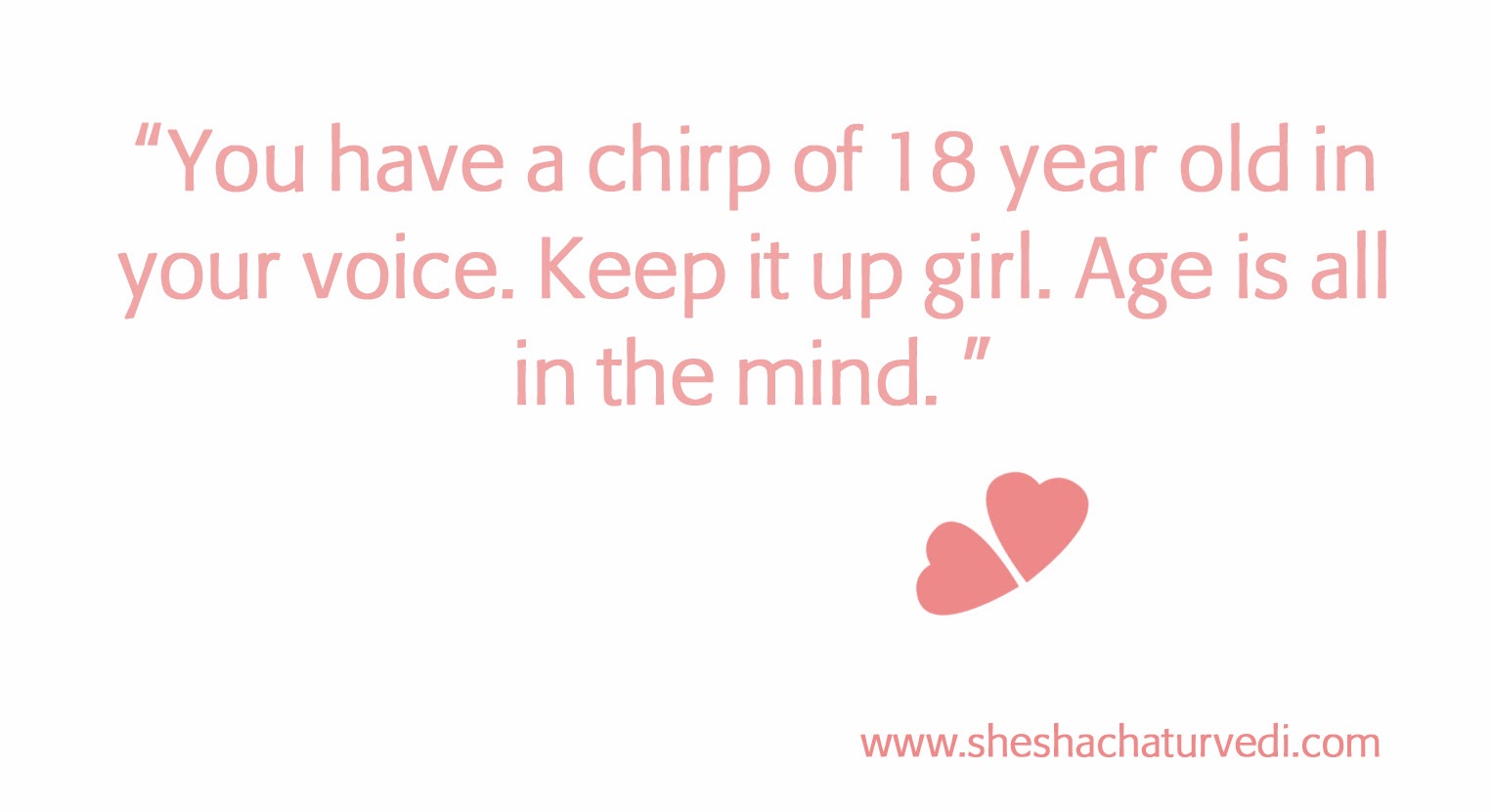 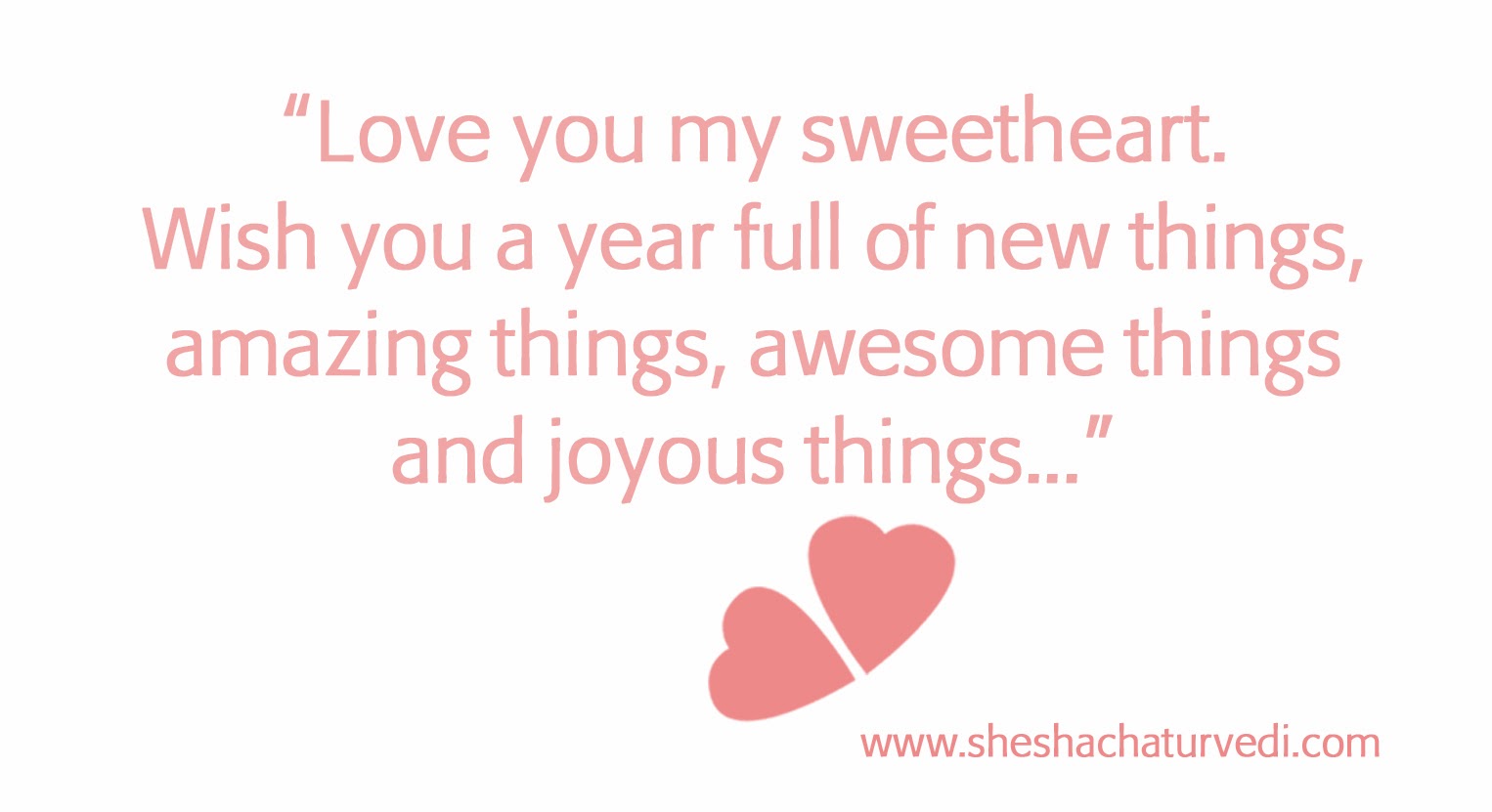 After so many different reactions, I found this worth putting here too. Most of our world is normal. 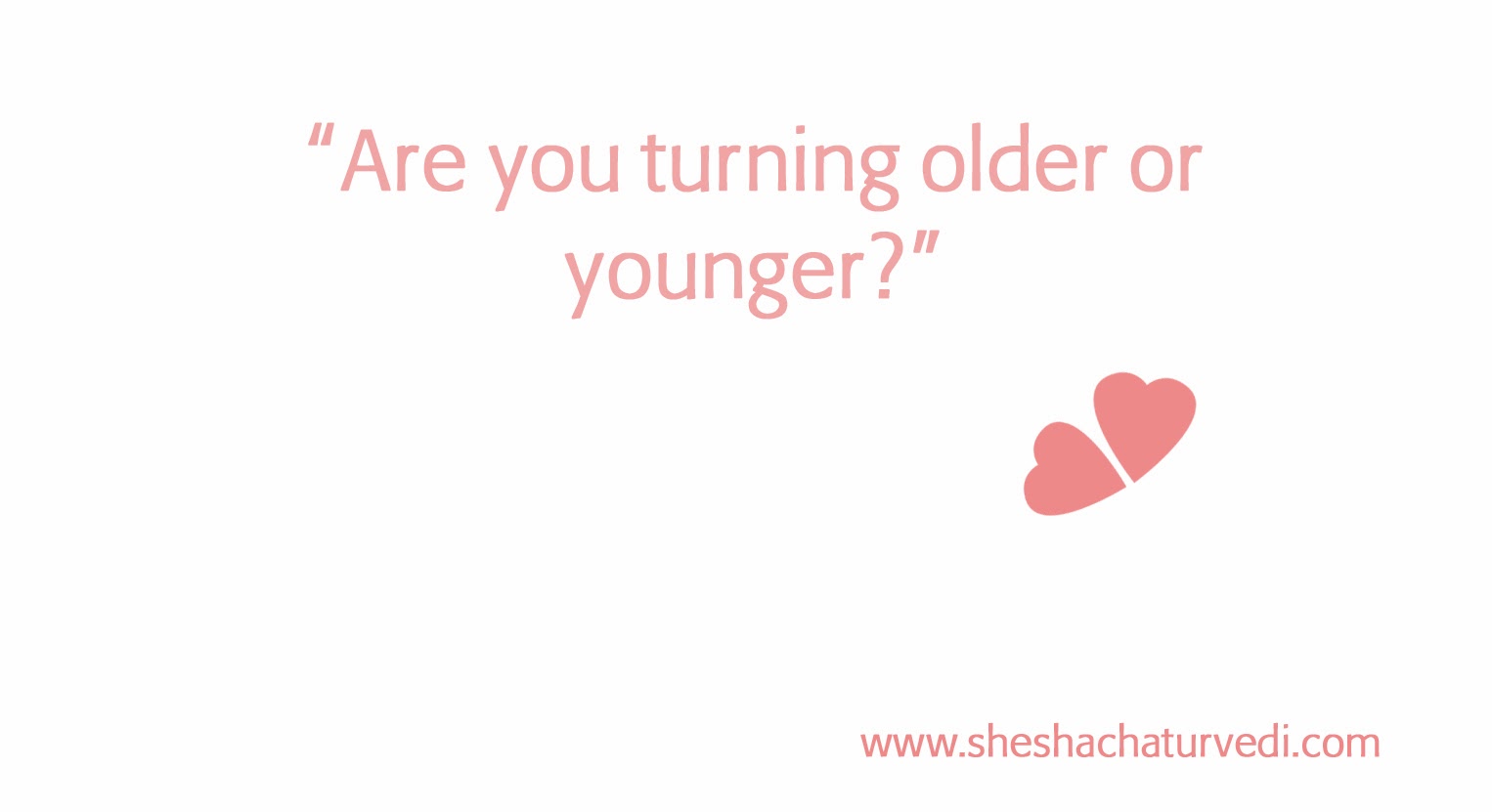 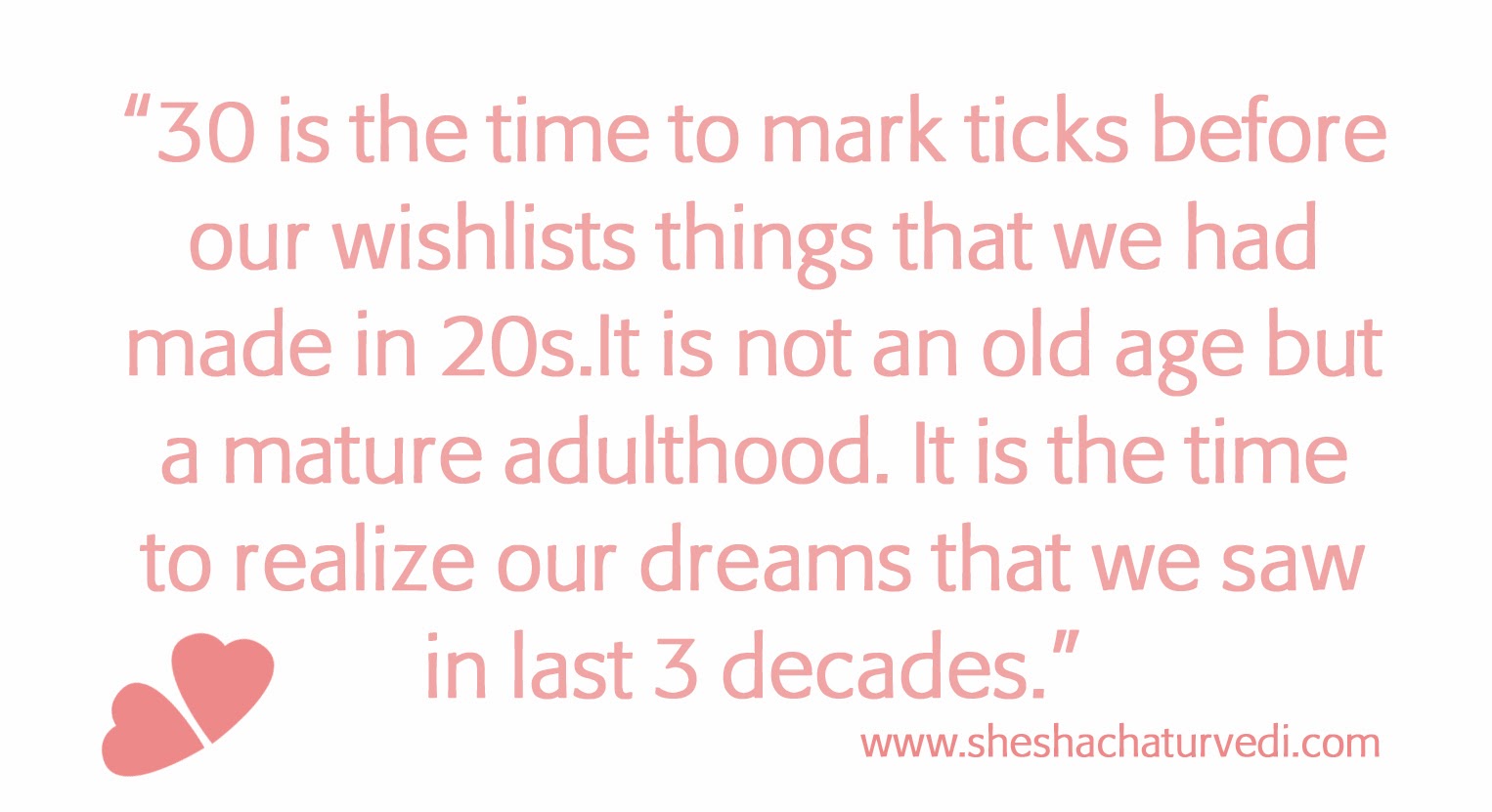 Yes, one may feel jittery, uneasy, uncomfortable before getting comfortable with the number '30', but why not look at the brighter side?

P.S.: If you look at larger picture its not 30, it is just a 30% out of 100(atleast I feel it will be 100 years)- far from half-life!
12 comments:
Email ThisBlogThis!Share to TwitterShare to FacebookShare to Pinterest
Labels: birthdays, people, Take Ten 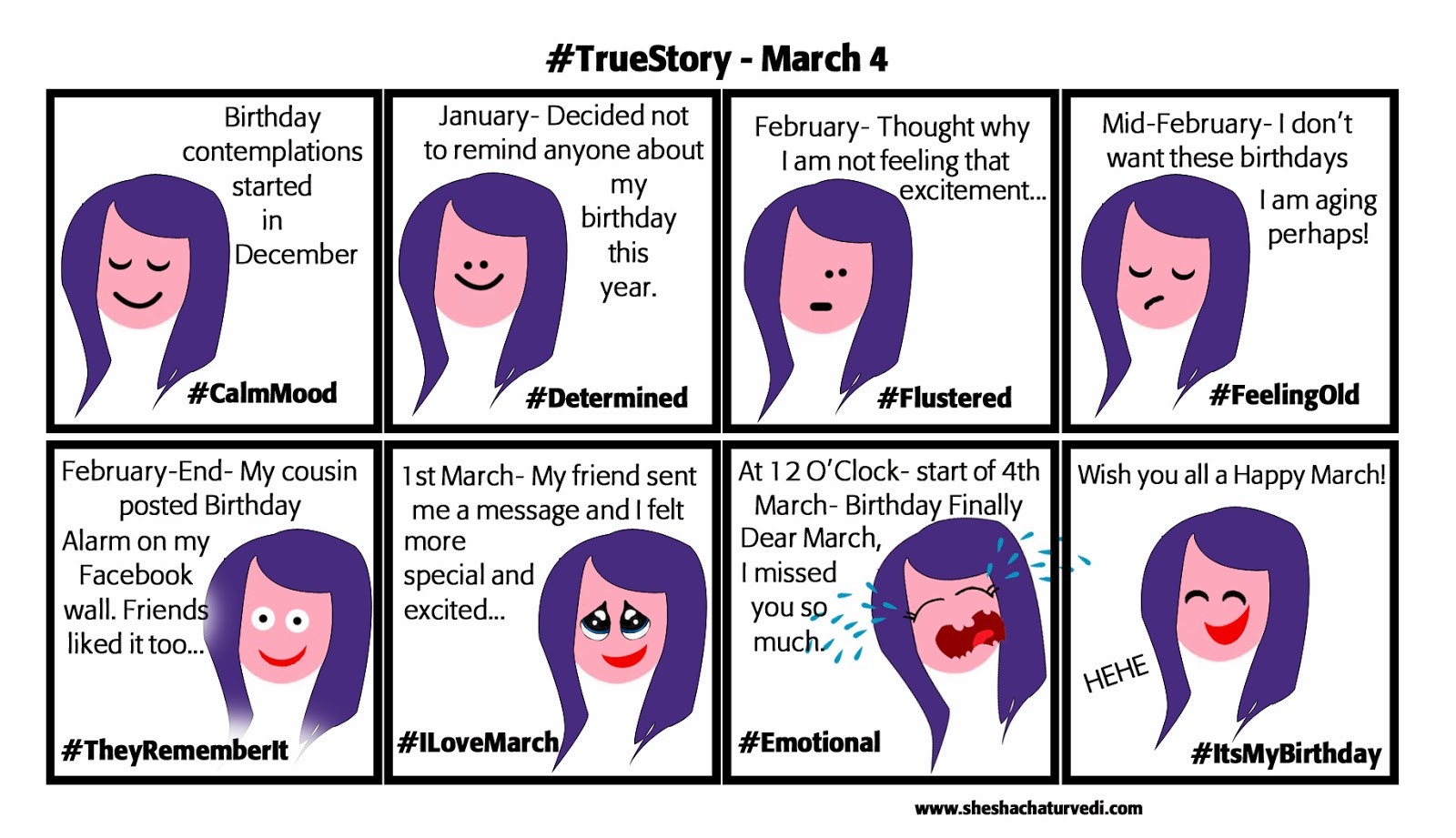 Sometimes growing up confuses you, whether to be excited or keep calm and act with maturity. But then you realize it is just growing up not growing old, which is not a big deal. Age is just a number. This day like always is over pouring with awesomeness...