Have you ever wonder why boys don't bathe when young? They prefer stinking socks over a washed pair, or prefer to wash hair once in a blue moon with shampoo. Either they are lazy, studious, procrastinator or bath is just not their priority. I had known such boys when I was young. Against a furious mother, my brother used to take cover under the excuse that if he indeed bathed daily, he would get decomposed like soaps or washed out like old clothes. Some of these stink machines changed with time or under the influence of their wives or girlfriends. That is why God has created women, to save the mankind from horrors of daily life.

Like everyone else I too had my share of smelly encounters, but there is one that can never be forgotten. I had my 10th standard CBSE boards and I used to go to my cousin's place to study. With highest score in his class and a strong determination to work even harder, one of these cousins couldn't afford wasting his precious time bathing during his board exams of class 12. He told me he hadn't taken a bath for the whole week and hadn't washed his hair for over two. I was trying hard to hide my revulsion but it was so strong that it found it's way to my face, and my cousin, unfettered, without any trace of embarrassment just laughed.  I was somebody who would not have her breakfast without taking a bath. I further imagined if this continues for another week, this heat and his sweat would consume the human race and some new species would then evolve and flourish. I pictured his body transforming into jungle, with termites and leeches, and big sand-mountains glued over him. Being a fan of fairy tales, I was prone to such type of imaginations.

I decided to fight this evil. Adopting a most serious countenance and with my wisest expressions, I, in a calm yet convincing tone, asked him to take bath. I gave references to him that my mother gave me about the health problems faced by people who don't maintain good hygiene on routine basis. When he seemed unperturbed, I, a little exasperated, started exaggerating describing leeches and mice crawling over his body.

He was smiling. But I had come too far to go back, I was persistent. Since he was elder, and smarter too, he decided to calm me instead of shunning me. He said, he will take bath on the same day on one condition. I was ready to agree on every condition at that time.
"Close your eyes", he said

I closed my eyes.
"Now think about the place you want to be at, imagine the surroundings."
I did exactly I was told.
"Now, take a long and deep breath", he continued.
I took a very deep breath... and I ended up getting choked. A shriek escaped by mouth.
He was laughing. Have you guessed what happened?
When he asked me to take a deep breath he put his unwashed head of two weeks under my nose. Summers made the stench even worse. The horrendous smell went down from my nose deep into my throat. I would have haunted him for rest of his life had I died during that smelly encounter.

He did bathe later. And I got the lesson of my life: Don't stress or mess with your brothers. They are the real masters of the game.

P.S. I posted an advice on How to woo a girl, on something I heard sometime back! 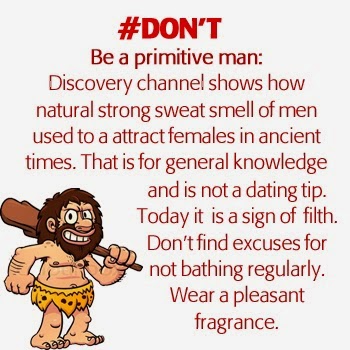 With evolution our attraction parameters have changed.

TeamIndi and Racold you made me re-live the old pains. Because of you I decided to share the heart-wrenching stench-story of my life. You owe me something!