Mysterious Mosquitoes and My Miseries

It's true that vampires are fictional characters but when looking at these blood suckers I learned none of the authors rightly described the vampires. They do exist but they look different than what we saw in Twilight series! Since summers have started so has started their party season. Being a warrior from human faction, I have often raised my voice against them on various platforms viz. Twitter, Facebook even on my Google-talk status. But all in vain. These creatures sit on my Twitter/Facebook wall through my screen but are unperturbed by my democratic dharnas and agitations. Two of them have started buzzing over my ears again and I have decided to go inside my mosquito-net and write this post(petition) today.

Here I am sharing some facts about mosquitoes along with some status updates from my itchy-misery times:

Mosquitoes are the deadliest animals on Earth; more deaths are associated with them than any other animal on earth.

The buzzing sound from mosquitoes comes from beating their wings when they fly. 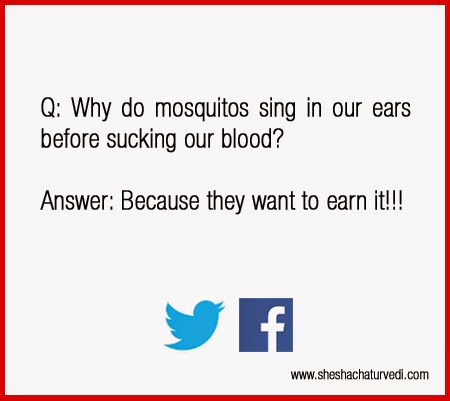 The mosquito diet is sugar from plants, not blood.

Only female mosquitoes bite and suck blood because protein in blood helps them to lay eggs. Males live on flower nectar. 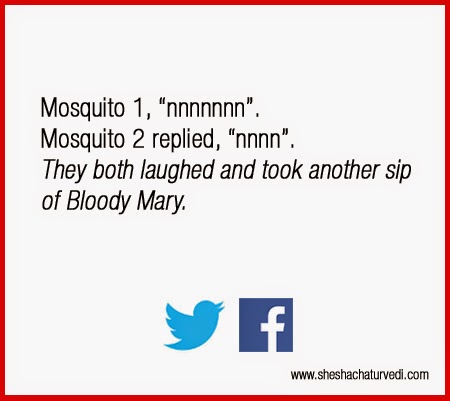 Antarctica and Iceland are most probably the only mosquito free countries in the world. 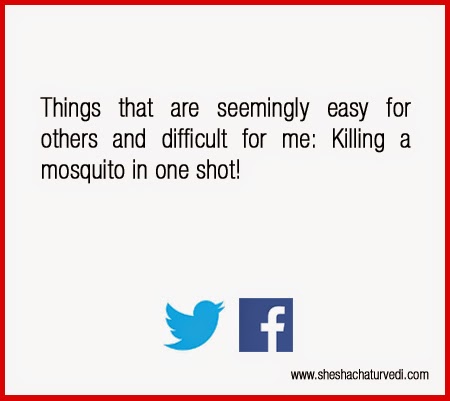 Clute, Texas celebrates mosquito festival in the last week of July. They have mosquito killing competitions. Also in fashion contest they give various titles like ‘miss mosquito legs’ etc.

Mosquitoes can’t see but they do detect infrared radiations coming from warm bodies and from chemicals they emit. So we can run, leave the place but we cannot hide from them. They sense their food from approx. 30 meters away. 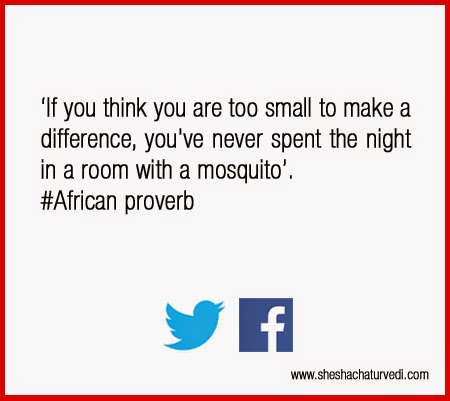 Not all mosquitos live on human blood; some of them live on other animals.
Some solutions:
1. Grandma remedy suggests eating bittersweet fruits of neem-plant called 'nimbori' in India, in order to avert mosquito bites. Tried and tested for success!!
2. The latest mosquito electrocution racquets are ace technique: hmmm they always said playing sports helps combating disease and stay fit.
3. Repellant sprays, All-out and Kachua (a mosquitoe repellant coil) become ineffective over time.
4. When feeling lazy to wave your racquet around/don't want to eat the bitter 'nimbori' or not wanting to choke on sprays, hang your mosquito nets, These are the most effective solutions though they restrict free movement around the room!