Ten things you might find common between your child and you as a child...

Wish you all a very Happy Children's Day. Today for some reason I was remembering my childhood and was reading back the posts I had written long time back about my frisky and adventurous childhood memories- Childhood Discoveries, Teachings and Lessons...

With changing times plays, priorities and lives of children today have changed as well. But a few things may never change. There are times when you find a stark similarity between your child and your childhood . Here I have tried to point out ten such adorable similarities that have passed on between the generations...

Could you relate to above situations? Can you add more to the list?
Wish you all a very happy Children's Day again!
P.S. There is an online community RapeRoko against rape and abuse. Do join the cause and create awareness: 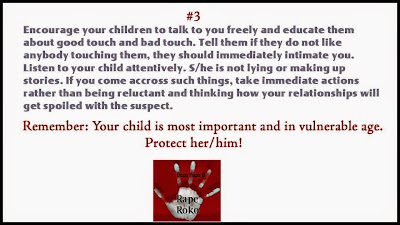 To Smokers with Love -III

There are many reasons why I hate smoking. This is one of them!

They were resting on a couch. Her head was relaxing on his shoulder; left hand holding one of his hands. She was playing with television remote from the other hand, her eyes were looking down digging the earth deeper, mind was lost in rumination. He was sitting idle besides her with his eyes closed and his idle hand was holding a business magazine against his chest.
“Have you never been in love with another woman, after I came in your life?”, she murmured.

A silent woman is a terrorist, who is planning to bombard the tranquillity out of your life. She believes her curiosities are good for her existence but in reality her idle mind is a threat to mankind.

With an effort he made Hmmm sound from his throat ignorantly, directing  to a careless affirmation . Somewhere he had become used to these small nuclear-bomb attacks on him. And as humans have evolve, he had come through a tough stage of evolution too.
“What ‘hmmm’? Answer me?”
“Yes I don't want to lie here. I fall in love with a new woman almost daily, I just can't help it.”, he answered her with a dragged voice still not willing to speak. Though proud and amused at his brave speech.

She straightened her head, her eyes were wide in shock trying to pierce his mind. Her reaction alarmed him suddenly thinking back on what he had said without weighing the repercussions of it.  He was still studying her expressions, she was staring at him in disbelief unable to understand what to do. Her mind fumbling the past events where she could find one moment, that single moment when he seemed disloyal, uninterested in her, arrogant or anything that can prove his infidelity.
He took a deep breath and calmly looked at her to understand the level of reactions that were taking place in that small nuclear reactor.

A while later he continued, “You are full of those threatening moods. You amuse me, threaten me, love me, and all of a sudden become a hurtful soul weeping badly. Sometimes you are a lioness saving your own pride, sometimes a rabbit scared of a beaming light. Don't you think you are  a new person daily?  You hardly give me any time or opportunity to think about anyone else in all this.”
She shyly smiled a little. His expressions were teasing her and his eyes were giggling at her. Her love for him made him one of the most desired men in her eyes, and herself so plain in his comparison! The feelings of mad-love and desire instilled a sense of insecurity in her.
She rested her head back on his shoulder, “There are so many women better than me around you...", she continued, "You never felt a temptation of knowing or falling for anyone? Though I know you will not tell me the truth now seeing my reaction a while back but I am just asking!”
His lips spread out. He was smiling as he sensed another fit of insecurity in his lady. Probably every woman faces this state once a while in her life. He repositioned himself, cupped her face in his manly hands, gazed deeper into her eyes and said in a very serious tone, “You are perfect for me.”
He paused a little. She was looking at him with a little smile, a little blush waiting to hear him further. “There must be thousands of men, I am sure, who are better than me in every respect. Better in looks, physique, humor, money, status or everything.  And there will be those who are even better than them. This has no end. Why you are with me is because you love me. Your love makes me perfect in your eyes. And as I can see it is making you insecure now. There may be hundreds of ladies who look fairer than you. But they are not you. For me you are fairest of them all. The way I feel for you, I don't think I can ever feel it for anyone else.” He kissed her forehead.  She was calmly smiling looking back at him, satisfied with his answer.

Women are like puzzles, daily sweeping through uncertainity and a new set of emotions. Sometimes love and assurance is all they need. She needed no more answers for the day, or weeks or may be for months to come...
14 comments:
Email ThisBlogThis!Share to TwitterShare to FacebookShare to Pinterest
Labels: breakups, fiction, love, Some More Stories
Newer Posts Older Posts Home
Subscribe to: Posts (Atom)