“We need to talk. I don’t know why you are so fond of him but this guy took us to the wrong place. He is a fraud” I said in an infuriated tone.

“Don’t be judgmental. He  too was new to that place.” GK was trying to soothe my sulking mood .

“You know I cancelled all other places from our itinerary for today and asked him to take us to that mountain. But he dropped us at some third grade place to explore. And after that he was defensive saying madam I too am coming to this place for the first time.” I said mockingly “Why the hell did he say yes, that big yes..." I emphasized expanding my eyes, "with so much confidence when I asked him if he knows about that mountain.”
My whole day was spoiled. While our passports were with the visa authorities to be stamped, we planned a short trip to Coorg in Southern India soon after our wedding. It was our first trip together. I didn’t know much about this place. In the hustle and bustle of our marriage I couldn’t do my homework that I normally do before traveling to any place.

GK's sympathies were still with him, “He is not proficient in English, there must have been some misunderstanding.”
“He is a shrewd man. You are innocent. I have traveled a lot in India, I know how sometimes these people dupe the tourists to save their efforts.”
He tried to suppress his smile, “Okay okay calm down. What is done is done.” He said, trying to cool down my fumes of disappointment and loss of a day.

Harish, our driver promptly arrived next morning to drop us to Bangalore Airport. He had dark brown skin and a slightly bearded face. His hair were curly and his eyes were small. He was always smiling, medium heighten, lean man of 25 years. On our way to airport GK was constantly talking to him.
“How much do you earn from driving a cab Harish?”
“Sir I get Rs.15000 per month.” He replied in his south Indian accent.
“Oh! That is hardly enough for a city like Bangalore.”, he asked him while cleaning his glasses “So are you married?”
Sir I live here with my elder sister and her husband. My parents are searching a girl for me. It is not easy to find a good girl these days. All the parents see the pocket of a guy, then only they are willing to give their daughter's hand for marriage. 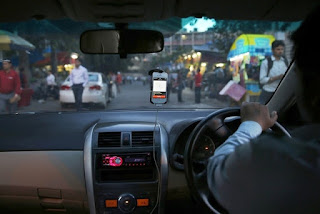 “Hmmm” my husband sighed in a tone drenched with empathy. “So you send money to your parents?”
“Sir we have our own land in the village that is 65 kilometers away from this place. We grow coffee and cardamom there. My Brother also works there. But a single piece of land can’t feed all the mouths."
And he talked further to Harish about his career plans on which GK gave him plenty of free advice (I admit those were good pointers). I was not in a very great mood ofcourse because I still felt cheated by that guy.

On day, I was surfing the internet sitting beside him.
It was one o'clock at night, this was couple of days after coming back to Delhi. He was lying down with both his hands under his head and legs crossed picturing something on ceiling above. Just when I started wondering what was going in his mind, he rose, as if from a meditation and said in his deep voice breaking the silence in the room
"You know I am a lucky man. I have met good people in my life like you...and Harish!"
I was staring at him in fury...
Email ThisBlogThis!Share to TwitterShare to FacebookShare to Pinterest
Labels: AZChallenge 2016, Life Previews