Omen- A tale of an inauspicious man!

Once a man in the reign of the Mughal emperor Akbar became unpopular as a bad omen. The news spread in the entire kingdom that whoever looks at his face in the morning, encounters a day full of disasters. People started abstaining themselves to came across him. Soon it became challenging for him to step out of his home. This news soon spread like a fire and went into the ears of emperor. Akbar thought to himself that no man in this world could be unlucky to others. That was a thing of superstition. So he called him to stay for a day in his Palace. He decided to see his face first in the morning to prove that superstition wrong and do justice to the poor man.

This man, in a loss of hope, was happy to think that life was not so cruel to him, that after being forbidden by friends and society, his King was there to take care of him and to prove everyone wrong.
Next day, as was decided; he was presented before the emperor soon after the sunrise. Akbar welcomed him and assured him that he will prove everyone wrong. He asked him to relish his stay in the palace for the whole day.
This man filled with gratitude, thought to himself, “How many people are fortunate enough to live with a king in his palace for a day!” He thanked his God again and again.
An hour later, while using a knife, Akbar injured his finger and blood started flowing out. Looking at his wound, he became so mad, that the face of that unlucky man came in his mind first. Filled with rage he asked his servants to tell his family and entire kingdom that a man who brings bad luck to the world, has no right to live. Hence he will be hang on to death in the following evening before the entire kingdom.
This man after hearing the news, started asking for forgiveness, thinking about his family, his children.
When his wife heard about the news she ran to Birbal for help (who was one of the advisors of the Emperor, famous for his presence of mind and wits). She pleaded him to save her husband and told him about the whole incident. Birbal assured her that he will do something.
An hour before the execution, Birbal reached the palace, and heard the whole story from the mouth of emperor. “I saw his face first in the morning and had injured my fingers. He is the sign of bad omen to the entire kingdom, he brings bad luck to people.” Akbar confirmed in a robust voice. 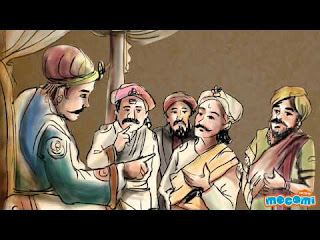 “Respected emperor, if you permit, can I ask a question from this man too before you hang him to death, “ Said Birbal.
Do that soon, we need to be freed from him as soon as we can, declared the king permitting Birbal for interrogation.
“Dear man” said Birbal, “our emperor saw your face in the morning and you have brought such a bad luck to him that he wounded his finger. Whose face did you see first this morning?
The man had a smile and ray of hope, “The emperor’s”.

Birbal then moved towards the emperor, “Whose face is more inauspicious, his, who caused you a wound, or yours who has brought him near to death?”
Emperor realized his mistake and the man was released. It was declared that anyone who will regard this man as a bad omen would be imprisoned.
Later Akbar thanked Birbal of stopping him from the sin he was about to commit.

P.S. An excerpt from the very famous folktales of Akbar and Birbal, I read during my childhood.
Image Credits: Google
Email ThisBlogThis!Share to TwitterShare to FacebookShare to Pinterest
Labels: AZChallenge 2016, Some More Stories