Killed for honor? What did they kill, their child or their soul? #womenissues #socialissues

A barbaric idea fermenting in minds of some nomadic humans is that honor of a family can be redeemed by killing their children. In this century, we still come across about the news honor killing. This is one of the problems that is prevalent in the entire world, there are cases of honor killing in both developed and developing nations. More than 90 percent of the victims are women. What do these women do different than their male counterparts to deserve a death? And does family’s honor is restored or instead it is stained with blood of their own child’s death and continued for generations to come!
Families with strong patriarchal roots get offended the most by women who want to live their lives other than the established norms of their families. Some of the reasons for which they are killed are refusal to submit to forced arranged marriage, marrying a person against the will of family, seeking for divorce without the consent of husband, having a sexual orientation different from majority of people in the world, and sometimes those women, who are raped, get killed by their families, as if it was their fault. What sort of honor the family is saving itself from by killing women who did nothing! Ever heard of a man being killed by a family for raping a woman, abusing his wife, or bedding with another person outside the family.

Highest rate of honor killing is reported in Jordan. In Jordan such butcheries are legit by the law, for families to redeem their integrity.  Until 2016, even the law in Pakistan, was similar, if a family pardons such slaughter, the law doesn’t punish the killer. However, in the famous case of Qandeel Baloch, the court passed anti-honor killing law. And soon after it, the bill was passed in the parliament under which the assassin will get minimum of 25 years of imprisonment.
In India the cases of honor killing are also no less, especially in the northern states of Punjab, Haryana, Uttar Pradesh, Rajasthan. As per the law, a killer is entitled to strict punishment like any other murderer. Although many cases do not get reported and are kept secret by the groups in village. Government, due to lack of documentation, stays ignorant.


Can the honor of such families be redeemed after a dreadful, heinous crime? Although, with advancing world, mindset of people is changing too. Media and education is playing a great role in it as well. Let us be brave to breathe till the humans and humanity both will be considered prime religion than any other, and entire world has a mind to let go of trivial issues honorably. 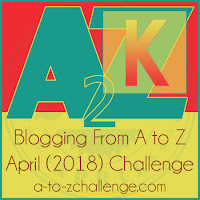 P.S. It was a tough day for me today. Going through the media reports and global scenario of honor killing was awfully depressing. Possibly I couldn't justice to the topic, I hope these atrocities end in the world forever.
Expect a light post tomorrow, outside this years self declared-challenge theme!
Email ThisBlogThis!Share to TwitterShare to FacebookShare to Pinterest
Labels: APRIL AZChallenge 2018, Social issues, Women issues