Y-chromosome is depleting, will men become endangered or extinct in future?

One of my scientist friends, who is researching on cancer in Israel, told me about this gradual depletion of Y-chromosome from living organisms. Y-Chromosomes, that are responsible for male production, are passed on to one generation of male to next, while women don’t need one. The idea of depletion itself sounds horrific, because men and women both are responsible for the human continuum. Unlike other chromosomes, which exist in two copies, Y exists in a single copy. Studies suggest that genes in Y-chromosome degrade subsequently and are lost eventually from genome. 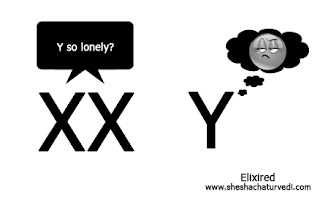 In humans depletion of Y-chromosome will take place in few million years. However, before that genetic engineering may advance to the point that it may enable female (same sex) couples or infertile males to conceive.


What if men will not be there? One would say that all bad things associated with men will also end. But on the other hand, all good things associated with men will end too. From a broader perspective, a human, irrespective of the gender, has both the characteristics, good and evil. While women issues can be linked with male dominance, they cannot be linked with male existence.


If we talk about male extinction from a social perspective, rather than scientific one, what could be the repercussions? After gradual depletion of Y-chromosomes, world will witness high female to male ratio. If men will be in minority, women will be more secure from male atrocities than ever. But if human nature of wickedness persists in the one who dominates, there would be a rapid rise in men-issues.

Did you know about degeneration of Y-chromosome before? How did it make you feel? Do you have any views on the same?